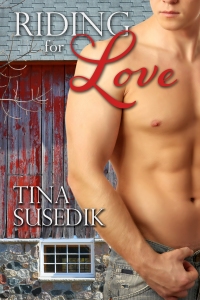 Can a man who is afraid of horses learn to ride to re-establish a relationship with an old flame?

“Hi, sweetheart,” Rose said, ruffling his hair before going to the refrigerator for a glass of lemonade.

He jumped and slapped a hand to his chest. “Geez, Mom, you scared the daylights out of me.” He set the brochure down and picked up an envelope. “What are you doing home? I thought you were going out with friends tonight.”

Rose sat down on the opposite her son. “I did, but Tom had to get back early and the others had family obligations. Tonight is the last night at the ranch for a youth group from Milwaukee.” She reached over and slid the brochure across the table. “It’s a group of teenagers learning to ride and care for horses to teach them alternative ways to channel anger. Eve developed the program this year.”

“You should be,” Rose commented, flipping through the pamphlet filled with photos of the cabins, lodge, barn, and horses on trail rides. “Eve’s worked very hard to make the ranch a success. Every year she comes up with another way to help others relax and have fun. Last year was the first year for winter activities.” She folded the brochure and pressed it smooth. “Have you been out there yet?”

Denton opened the envelope and slipped out a sheet of paper. “No, I’ve been too busy at work. Besides, I don’t think Eve would appreciate me just showing up.”

“Why? She’s so proud of what she’s accomplished.” Rose peered at her son. “You never did tell me what happened when you went to dinner with her. Is she still mad?”

Running a hand over his face, he huffed out a breath. “I guess that would be a good way of putting it, although mad seems too light a word. I explained about Marie, and she seemed to understand what happened, but, after all these years, she’s still angry with me.”

“There could be a good reason.”

Rose reached across the table to stop his shredding the sheet of paper he was holding. “Could be she still has feelings for you. Do you still care for her?”

“What’s that got to do with anything?”

“I never lost my feelings for her.” He pushed the paper away and tapped his fingers on the table. “She said she never had closure. Well, neither did I. One week, I’m home enjoying time with her and next, I’m married to someone else.” He raked his fingers through his hair again. “Now she’s ignoring me. I’m probably beating my head against the wall. I’ve called, written, sent flowers.”

Lord, he hated it when his mother got that tone in her voice. She didn’t have to say one word, just utter “hmm” like she knew something he didn’t and he would ultimately pay for it. “Hmm, what?”

“What happened when you went to dinner with Eve?”

Rose chuckled. “Oh, I’m sure much more than that happened for you to be this upset.” She held up a hand to stop a reply. “Don’t say you’re concerned about the lawsuit. I’m your mother. You’re a problem solver and taking care of the embezzlement was more than work for you.” Rose rested her chin in her hand and stared at her son. “It’s solving the problem of Eve making you discombobulated.”

Denton pushed the piece of paper toward his mother.

He smiled nervously, stood, and paced the length of the kitchen, stove to refrigerator and back again. “Part of a plan to get close to Eve.” He finally settled his backside against the stove, folding his arms over his chest in defiance.

Rose dropped the paper on the table. “Are you crazy? You can’t possibly do this.”

Rose stood and placed a hand on his cheek. “But this is a little drastic, isn’t it? Are you so keen on getting her back you’d go this far?”

“Mom, I need to find out if what we had as teenagers can be resurrected.” Denton wrapped his arms around his mother and held her close so she wouldn’t notice the tears in his eyes. “I’ve missed Eve for ten years and will do anything to win her back. Anything.”

“But, dear, how are you going to be able to get through two weeks of riding lessons? Aren’t you still afraid of horses?”

He laughed, hoping to ease the trip in his heart at the thought of spending fourteen days on the back of one of those giant creatures. But fourteen days spent in Eve’s company sent his heart tripping faster. “Nope.”

Rose leaned back. She squinted at him.

“Nope, not afraid.” His Adam’s apple bobbed up and down, and he refrained from wiping sweat from his upper lip. “More like petrified, horrified, scared stiff.”

“Well, you should be, considering what happened the last time you rode one,” Rose said, leaving Denton’s arms and picking up the confirmation for his stay at the ranch.

“Mom, that was twenty years ago. I need to overcome my fear of horses to spend some time with her, hopefully break through the wall she’s built against me,” Denton replied, trying to convince himself as much as his mother.

Rose shook her head and patted her son on the shoulder. “Well, you have only three weeks to convince that to your shaking hands, my dear boy.”

Musings and Anecdotes of an "Ordinary" Working Hoosier Mom