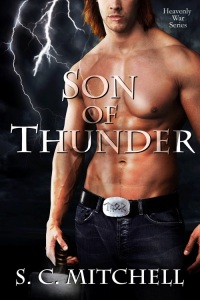 The son of the Thunder God, Thor, has a lot to live up to…and no time for love.

The man looked like a god. Then again, he was one. . .  Jord Thorson was a god– the son of Thor, the Norse God of Thunder. In his search to find his missing father, Jord seeks out the mortal, Meghan Larson, who is in possession of his only clue–Megingjörð, Thor’s magical belt of power.  But when the belt decides to take matters into its own hands, locking itself around Meghan’s waist, Jord and Meghan are plunged into the middle of a massive conflict that rages across the heavens.  Giants, magical artifacts, and a golden city in the clouds weren’t exactly what Meghan Larson expected when that amazing belt arrived at her museum. Now Megingjörð is stuck around her waist and talking to her in her head. She’s got to be dreaming, but with the wonders around her and hunky Jord Thorson at her side, Meghan’s not sure she wants to wake up.

The rainbow ended on a street that appeared to be paved with silver stones. Jord pulled up to the first building, a tall tower of a structure. As he turned off the cycle Meghan jumped from the seat and swatted his shoulder.

“You might have warned me a bit, about what to expect.” Her heart was still racing, but now that her feet appeared to be on solid ground again she felt herself calming down.

“Be honest.” He smiled at her. “Would you have believed me if I’d told you?”

Had anything that had happened to her lately been believable?

“Jord!” A husky voice called from the doorway of the building. “Welcome home.”

A large man in blue jeans and a black t-shirt with an ornate sword belt strapped around his waist leaned on the doorpost of the tower entrance. He had short blond hair and a very full beard. The sword at his side had to be almost four feet long. He was smiling and waving.

“Heimie.” Jord went to take his outstretched hand. “Any news of my father?”

“None that I’ve heard,” Heimie replied. “Your grandfather has been looking for you though. Maybe he has some news I haven’t heard.”

“There isn’t anything you haven’t heard, Heimie.” He patted the man on the shoulder.

The man then looked a Meghan, raising one of his eyebrows. “And what do we have here?”

Jord turned to her. “Heimie, meet Meghan Larson. Meghan this is Heimdall, guardian of Bifrost, the Rainbow Bridge. He’s kind of like the TSA at airports.”

You can purchase Son of Thunder at:  http://www.amazon.com/Son-Thunder-Heavenly-Series-ebook/dp/B00BJ64GPY

For Readers, Writers, and Lovers of Historical Fiction

A blog full of musings and anecdotes by Author Kyra Jacobs